The Vicar... or Maybe Not

I was out with Jim in the Northern Corries yesterday. It was one of my more eventful days' winter climbing and won't be forgotten in a hurry!

We were both feeling good and had developed a bit of confidence from the first couple of routes of the season so decided to have a wee go at something hard. The Vicar (VII,8, summer E1) is a route that has both inspired me and scared me for a while; it looked to be in excellent nick so we decided it was worth a shot. 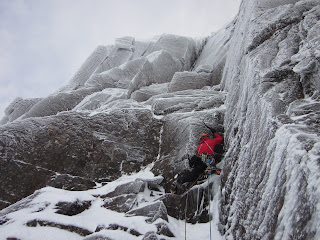 The first pitch is shared with Nocando Crack. After reading about Messrs McPherson, Moran and Robertson's recent ascent of that route, we were expecting to find a bit of ice but were still surprised by how much was there. The steep corner near the start of the first pitch was climbed purely on ice, which meant Jim had a fair old run-out by the time he got established on the mixed ground above. 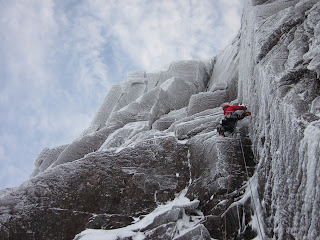 From there, I led a fairly short but quite exciting pitch up to the base of the Vicar cracks themselves. These looked to be in perfect nick from below but on closer inspection, they were heavily iced, making placing solid gear difficult but providing no assistance for the climbing itself. From the belay (a stonking peg plus a couple of nuts in the icy crack), it was obvious that this wasn't going to be easy!

We transferred gear, Jim psyched himself up, I shuffled across to try to get out of impalement range. Jim moved off, clipped the top piece of the belay as a runner, reached up past towards the ledge above then slipped and shot past me. Before I knew it, I was upside down with Jim below me. Looking up, the gear in the icy crack had ripped reducing the three-point belay to one. Jim and I shared a wide-eyed stare and some deep breaths for a second or two, both quickly coming to the conclusion that another attempt wouldn't be wise. I lowered Jim to the ground, rigged an abseil (with lots of paranoid triple-checking of the knot and the anchor) and descended.

We knew we'd been lucky to get away with it, and we had neither the nerves nor the daylight left for an attempt at anything else of a similar standard. However, talking through the options, we realised we were probably he only two winter climbers in Scotland that hadn't done Savage Slit (classic V,6) so we decided to nip up it. 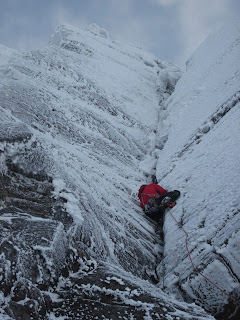 The route was well plastered so it was a little more time-consuming than expected but we managed to get up & down before dark. It certainly helped to settle our heads. It seems a shame to think of it as a 'consolation route' as it's an excellent climb and deserving of its classic status.

In the end, though, our experiences on the Vicar will be the abiding memory from the day. We made a few mistakes - over-ambition under tricky conditions, belaying from a non-ideal position, trusting gear that was compromised by the ice in the cracks - and we both know we were lucky to get away with it. It was a timely reminder that these routes have their reputations for a reason and that we need to pick & choose our moments to push the grade, scaling back our ambitions when conditions aren't ideal.
Posted by Neil Adams at 11:39