Battle of the Bulge

I was out in the Northern Corries today with Heike for our first winter route of the season. Plan A was black and we'd both done each other's Plan B, so after much deliberation we had a shot at Bulgy.

I first tried this route last winter with Andy Inglis. The entire crag was sheathed in ice, making it almost impossible to get any gear. We backed off at half-height, fearing a full-on epic or worse if we continued through the crux. Bulgy was therefore unfinished business for me.

Conditions weren't as different today as might be expected. There was certainly lots of ice around, although there was also good neve, crud and powder-on-verglas. It was also pretty wild first thing this morning so all in all, it felt very Scottish.

Heike led off up the first pitch. The leftwards traverse our into the main groove looks trivial from the ground but is actually sketchy, teetery and fall-off-able, but Heike made short work of it and continued up the groove to the base of the steeper corner. I led on from there and decided to bring Heike up to a belay below the crux, letting us communicate a bit more than would otherwise have been possible.

Now came the difficult bit. I'd heard that this route required big gear to protect the crux, but I didn't realise how big - I couldn't even stack hexes to contrive anything big enough. After much procrastination, I finally summoned up the bottle to commit to the move out under the roof which let me get some gear in. All of a sudden, the moves up round the end of the roof looked much more feasible and with only a little more faffage, I got through the crux. This was by no means game over as the climbing above was insecure in the icy conditions, but I eventually teetered, thrutched and grunted my way to the top. There then followed the excitement of the partially free-hanging abseil back to the packs then off home for tea and medals. 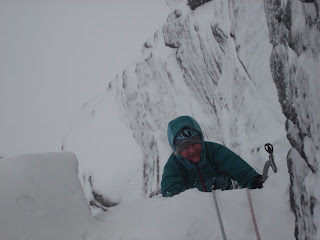 Winter is definitely here, and I hope this'll be the first of many satisfying days in the mountains in the months to come.
Posted by Neil Adams at 21:07