STS on the Ben!

Last Thursday my stomach was turning summersaults and I barely slept as I anticipated my first early morning alarm call of the winter. It wasn't a particularly unreasonable hour (5.45 am), but I didn't feel good. The morning of my first winter day out of the season always fills me with anxiety, but this time it was compounded by the thought of carrying a huge sack up to the CIC hut for a three day stay. So many thoughts running through my befuddled head - have I remembered to gather together everything I need for a big winter day out? Have I stashed those extra batteries? Did I pack the toilet roll for the CIC? Am I going to let anyone down? This is suppoosed to be fun for goodness sake!

It was a late rendezvous at the gondola car park and, as the rain stopped, our advance party distributed copious quantities of food and drink. Our large sacks became huge. There would be 12 of us for 3 days. We had enough provisions to sustain a small expedition for a month. There was no danger of leaving behind the 1.5litre of Famous Grouse but, when Simon Yearsley produced a substantial 5kg block of cheese, astonished faces quickly looked away. I'm not carrying that up there! "Yo Boi Mutherfuddas" cried the ever enthusiastic Mr Boswell as he stashed the cherished cheddar under his rucsac straps. Game on!

This was the 2011 "STS on the Ben". A gathering of prize winners from the Scottish Tooling Series and selected guests. Whilst I wasn't here on merit, I do happen to possess a key for the forest gate (legitimately I hasten to add) which will save us 45 minutes of hell and, as we reloaded the vans, I was conscious of my growing popularity and the principal reason for my invite!

The weather forecast was shocking, so bad that the day before I had genuine doubts about the sensibility of the trip going ahead. However, having staggered to the CIC hut, we were presented with some very white buttresses and significantly better weather than MWIS had indicated.This set the tone for a very enjoyable weekend! It would be several hours before the remainder of our team would join us, so time enough for an afternoon tussle with Gutless (IV 5) on the Douglas Boulder with Greg Boswell, Malcolm Bass and Harry Holmes. We descended in the rain as darkness fell. Although it was wet and windy for much of the night, Saturday morning brought an improvement, albeit the lower buttresses had been stripped of their white coats. We would have to venture higher into Coire na Ciste.

Malcolm Bass (whom I first had the pleasure of climbing with last year when he and Simon Yearsley generously invited me to share the first ascent of Free Range (VII 7) on No 5 Gully Buttress) and I headed for The Groove Climb (V 6) on South Trident Buttress, whilst Greg and Fiona Murray made the second ascent of The Minge (VII 8) on the lower side of the buttress. The latter filmed by our very own "STS on the Ben" film crew. 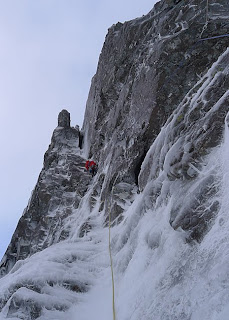 Malc and I were back at our refuge in good time to enjoy tea and cheese and a passing natter with Simon Richardson, whose tracks we had seen heading to his latest addition on the Ben on the upper reaches of South Trident Buttress. Afternoon became evening and, as Simon Yearsley's fantastic curry creation bubbled away on the stove, our thoughts turned to the likely fate of the remaining team of 4 (including one camerman) who had been climbing Thompson's Route (IV 4), but were yet to return. Thankfully, past 9pm, they stumbled into the hut after a worrying 3 hours lost on the summit plateau in white-out conditions. John Muir Trust please listen and understand that the Number 4 Gully marker has a value way beyond its perceived impact on this wilderness landscape. The sense of relief our friends felt on finding it was all too obvious. 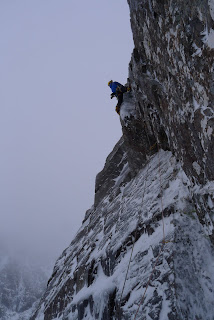 Sunday morning and a slow awakening for me. Perhaps a whisky too many, but I'll blame it on the stiffling heat generated by the fire that had been burning all night. Still, the cloud-base was rising and the buttresses looked promisingly white, so it wasn't long before Greg, Harry and I were breaking trail in the fresh snow. We had intended to climb Sidewinder (VII 8) on South Trident Buttress, but on the approach to Moonlight Gully Buttress we were attracted to an icy hanging groove on the unclimbed face to the left of Right Hand Gully. Good stuff! Your lead Greg!

As it happened, this wee route packed a bigger punch than was evident from below. The crux demanded an aggressive approach to surmount an overhang from the steep slab to enter a hanging icy groove. Ice, just a little too thin, and turf, just a little less frozen than would be ideal, meant tool placements were tenuous. A hard won solid hexentric gave Greg the confidence he needed to push on. A little higher and "Argh, I'm off". Nice lob Greg - glad the hex held!! Having lowered back to the ground, Greg's second attempt led to success. A scary VIII 8 on the day.

Harry and I followed in less than perfect style and, joining Simon, Karen and the cameramen higher on the buttress, we interspersed the giggling banter with talk on how much harder Scottish winter climbing is to dry tooling at Newtyle! 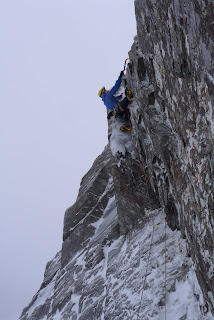 As for the route name, there was little debate. The Big Cheese, in homage to our fromage!

So here's to STS on the Ben 2012. I'll endeavour to earn my place but, failing that, remember guys that I am the gate keeper!!