I'm just back from an excellent weekend in Aviemore with a few mates, although it wasn't the most successful weekend's climbing I've ever had!

The forecast on Saturday was pretty wild. However, the forecast is often pretty wild and often turns out to be not so bad, so Andy and I applied the "blind optimism" approach to planning and set out with the intention of trying Time Traveller on Carn Etchachan. Unfortunately, the forecast was right and we got to the top of the Goat Track in a full-on Scottish hoolie. We presevered briefly, being blown over a few times and making it just far enough across the plateau to be sure it wasn't getting any better. Soon, we admitted defeat and headed for the relative shelter of Coire an t-Sneachda. 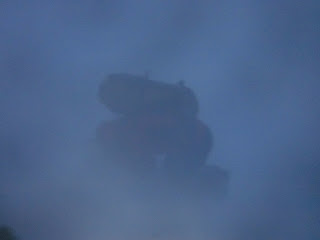 Time to turn back
It had been dark when we walked through Coire an t-Sneachda on the way up, so it was a surprise to find all the crags completely black. A couple of easy gully lines were just about complete but by this point, a log fire, a mug of tea and a fry-up seemed like an infinitely more sensible plan. 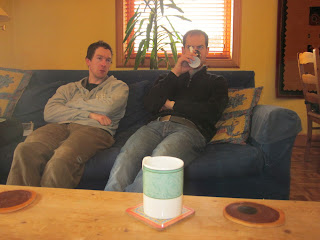 That's more like it!
Today was a bit more productive. Andy's mate Gwylim and I headed up to Creagan Cha-no, the crag Simon Richardson et al have been developing on the east side of Cairn Gorm (see www.scottishwinter.com for more info). We didn't have a topo but abseiling in past the cornice, we spotted an attractive-looking crack line on a short buttress to the left of the main crags. This looked like a slabby Grade IV from below but once Gwylim had led up to the base of the crack, its true angle became clear. I had a shot at it but backed off and we scurried up an easy gully to the left instead. It didn't look this steep from below!
By now, another couple of teams had turned up, testament to the crag's growing popularity. Borrowing a topo, we located one of the established routes, a pleasant Grade IV just right of Mainmast, the name of which now escapes me. Gwylim reckoned this looked about Grade II from below but was soon put right by his own taste of the rounded, steeper-than-it-looks granite. 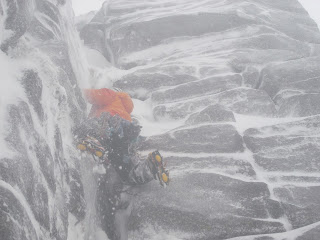 "It looks about Grade II"

After this, we had a shot at a couple of short, (possibly) new lines on the right-hand wall of that buttress. I tried the cracks on the left-hand side of the photo below but had an unexpected fall when a seemingly-solid hook blew. I was unhurt but didn't fancy a rematch, so did the wide crack and chimney line just to the right (starting just left of centre in the photo). This gave a pleasant pitch with tech 6 moves and quite spaced gear, although I'd struggle to justify giving it any more than V,6 given its length and the general lack of seriousness of the crag. 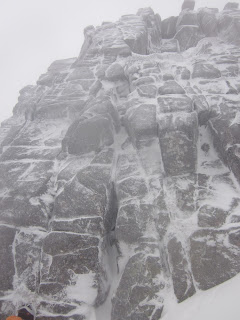 Our line took the wide crack & chimney starting left of centre and finishing through the overhung niche on the skyline﻿
Creagan Cha-no definitely feels like cragging rather than full-on Scottish mountaineering but it's a nice wee crag all the same. It's certainly worth knowing about for a short day or poor weather, and there are plenty of lines waiting to be done.
Posted by Neil Adams at 21:20