After a week of reports of black crags and melting ice, it was a relief to walk in to the Northern Corries yesterday and see some whiteness. The crags were in the ‘friendliest’ of winter conditions: aesthetically white but with only a thin coating of rime, and dry cracks that made finding solid gear easy. 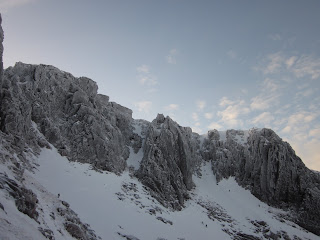 Our Plan A was one of the less white lines, which wouldn’t have been justifiable on the day. Instead, we decided to make the most of the easy conditions by heading for Number 1 buttress. I had never climbed here but Jim had some unfinished business and an ambitious goal. He and Francis Blunt had attempted Big Daddy (solid VII,8) last season in much harder conditions. Jim took a fall towards the end of the first pitch and had to hand over the lead to Francis. He managed to get up the first pitch but then in fading light, they traversed off into The Vent rather than attempting the top pitch. Jim was keen to have a rematch with Big Daddy but also had his eye on the harder finish, Daddy Longlegs (VIII,9). Having not climbed on this buttress before, I didn’t know if this would be feasible – neither of us had climbed Tech 9 in our lives – but I was keen to have a go.

I took the first pitch, which is the crux of Big Daddy and which Jim had had such a tussle with last year. Even under the very amenable conditions, I found it hard. Much of the climbing is quite insecure and balancy, particularly in the upper groove. It involves lots of bridging out between small edges, one monopoint on each side of the corner, which resulted in me having the worst calf pump of my life! Still, I managed to teeter my way up to the overhang at the top of the second groove. This looked daunting from below but fortunately, perfect hooks and good gear suddenly appear so while this section was a bit more strenuous, I didn’t feel in danger of falling off. A big rockover to the left brought me to the belay. 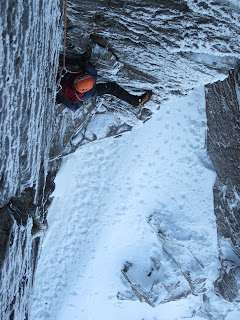 Although Jim had struggled on this pitch last year, he cruised it on second. He then led through the easy ground up to the big ledge below the top pitches of both Big Daddy and Daddy Longlegs. 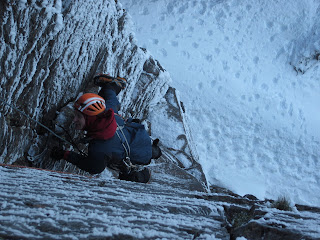 It was Jim’s lead and he was clearly feeling good – Daddy Longlegs was on! The pitch consists of two steep cracks separated by a small ledge. Jim seemed to be making light work of the first crack, cruising up it at an impressive rate and looking absolutely solid. However, the top of this crack is wide and flared, making the rockover onto the ledge above extremely awkward and technical. Having placed a bomber hex, Jim tried to make the rockover but had an axe rip at the crucial moment, resulting in a short fall onto the hex. Undeterred, he was immediately back on and pulled through it seemingly effortlessly. 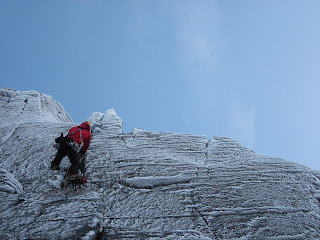 The crack above the ledge is even steeper – it overhangs by a few degrees throughout its length – but the hooks and the gear are perfect. After an initial foray up the first couple of metres to clip some in-situ gear and place some of his own, Jim set off up it in determined style. He made short work of it and was soon at the belay. I have to admit that I was apprehensive about even seconding this pitch but thankfully, I managed to get a solid adze placement where Jim came off and was just able to grunt my way up to the belay before my arms gave out. A short easy pitch led to the top, where we were treated to beautiful views across the Cairngorms in the January sunshine. 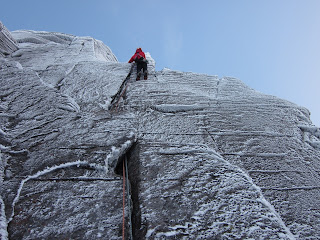 It’s always satisfying to succeed on a hard route but neither of us were under any illusions that this was ‘proper grade VIII’ – the conditions couldn’t have been kinder to us so VII,8 was probably fair on the day. However, the combination of technical, balancy climbing on the first pitch with sheer thuggery on the third made Daddy Longlegs particularly enjoyable. I’m sure I’ll be back for more routes on No 1 buttress at some point but in the mean time, I’m hoping winter kicks in again so that we can get to venues other than the Northern Corries!
Posted by Neil Adams at 10:22