Pabbay and Mingulay, at the southern end of the Outer Hebrides, contain some of the best rock climbing in Britain. After a brilliant trip to Milgulay a couple of years ago, I jumped at the chance to go to Pabbay with Malcolm Airey, Chris Hingley and Kev Hall. It didn't disappoint!

Even getting to Pabbay is an adventure. Train to Oban, Calmac ferry to Barra, a night in Castlebay then Donald's converted fishing boat south from there. Donald dropped us off next to Pabbay's beautiful beach and waved goodbye, to be seen again (hopefully) a week later.


That first afternoon, we took advantage of a good weather forecast to get across to the Banded Wall, a 60m wall of perfect, steep gneiss dropping straight into the sea. I did Spring Squill with Chris and Endolphin Rush with Malcolm, two brilliant routes that were the perfect reminder as to what islands climbing is all about. Endolphin Rush in particular sums up the style: probably only F6a+ or F6b and great holds and solid gear, but on a steep, exposed seacliff with basking sharks looking on.

We had a fair bit of showery weather during the week so didn't get as many big routes done as we would have liked, but the two we did do were definitely the highlights of the trip. The first was Prophecy of Drowning, which takes a spectacular line up the pillar on the left hand side of the Great Arch. Kev and I set off to do this in the late afternoon after dodging showers for the rest of the day and the fading light towards the top definitely added to the excitement! Swinging round the arete into a bottomless groove 40-odd metres above the sea on the first pitch, and looking down at the waves crashing onto the rocks below, will live in my memory for a long time.


The other big adventurous day we managed was on the Grey Wall Recess. The approach to this crag involved one of the most spectacular abseils I've ever done - 90m free-hanging from a block at the top of the crag to a wave-washed platform at the bottom. 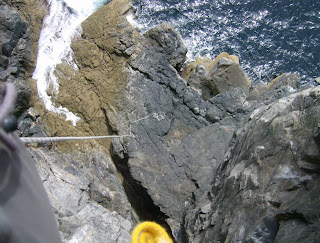 We went in a team of 4, with Malcolm & Kev winning the toss to do U-Ei first and Chris and I doing Mixmaster Snipe, the very good E1 just to the right. We'd intended to go back and do the other routes later but never got another period of settled-enough weather to be happy to go for it.

Even the shorter stuff on Pabbay is very, very good. On the showery days, we climbed at the Bay area, Poop Deck, Hoofers Geo and Big Block Sloc. The appropriately-named Immaculate Conception was truly stunning, easily a four star route anywhere else in Scotland!

Hoofers Geo should be one of the least serious venues on the island as it's normally possible to scramble to the base. When we visited, however, the Atlantic had other ideas! Having left the abseil rope on the other side of the island, we abbed in on a single half then climbed out on the other one. Whether because of this, general fatigue or my head not being in gear, I found Hoofers Route really tricky.
Inevitably, just as the forecast got a bit more settled again, it was time to leave. A cracking night in the Castlebay hotel with entertainment from the Vatersay Boys reminded us what it's like to be surrounded by other human beings. Then too early the next morning, it was time to get back on the ferry and  say goodbye to the Hebrides. I'll be back!
Posted by Neil Adams at 09:38