Return of the Blog!

In an attempt to pull this blog back from the brink of a forgotten about, low priority, 'when I can be arsed' statement.... I thought I would do something that I've been meaning to do for weeks! An update... 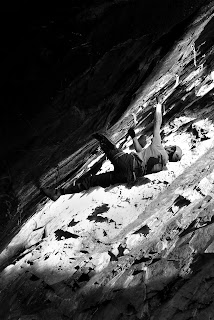 What a strange few months its been.... the winter season peatered out at the end of February, save for the hardy few who impressively managed routes in the remote corners of the cairngorms while the majority were out frolicking on the sun baked rock..... or in my case, hanging out in the last place anyone would want to be (The Tube, Birnam), locked in a horrible single-minded project focus, which ultimate ended in failure. Multiple energy-sapping attempts during 2 RP's to latch the final move of an M11 ended in a perverse satisfaction of being able to walk away from the cave knowing I wouldn't be returning for at least 6 months..... 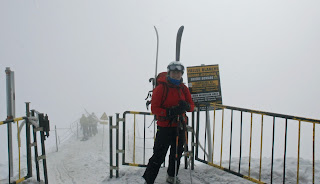 April was the month I had really been waiting for, and the prospect of 3 months of ski touring in the Alps with Monica! A few days of driving, via a Newcastle to Amsterdam 'mini crusie' (!), an exciting drive through Germany on the Autoban with Monica getting nailed by a speed camera (on the autoban?!?!), and a tired final stretch over the col du montet had us in Argintiere. A few days of great skiing on the Grand Montet and Valle Blanche had us primed for some touring, unfortunately this was to be the last of the good weather forecast, something I've frustrating come to accept in the Alps, especially in the Chamonix valley. 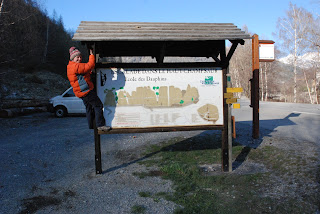 With the onset of unsettled weather and no obvious high pressure fronts arriving soon, the obvious decision was made to abandon ship. A last minute call was made on where to go and off we drove to Gap for some sunny sport climbing at Sisteron, Orpierre and Dauphin. This was as big a shock as 23degC temps in Scotland in March, with Monica having not climbing in 2.5 years! Having only held and trained with axes for the previous 6 months, cranking on rock with hands was certainly a bit strange at first!

With another front due to bring further unsettled weather into france, we escaped further south, this time to Espana for some more sport climbing (Suiranna) and sightseeing in Barcelona. The climbing was so good it might require a return visit..... nice crimpy climbing, loads of crags and friendly holiday grades equals a winner! Basically onsighting 3 x 6c+'s in a day was pretty strange compared to nothing above 6b+ over the course of 5 days in France! Grades..... who knows! 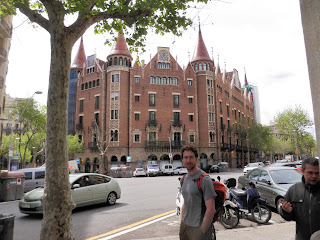 As for Barcelona, this was the first time Monica and I had been and we were both blown away by the city! Amazing architecture everywhere and such freedom of design, incredible! Doubly impressive when driving back through the drab cities of Geneva and Amsterdam on the way home.... although my mind might still have been on the daylight robbery we encountered on booking a hotel in Geneva. We should have been suspicious on being told of the free mini bar in the room, which might have offset the pain a little but no, even the fridge was full of soft drinks! Grrrrr! So in the end, a chilled out 3 weeks driving round Europe clipping bolts, skiing and sightseeing ended with a bender in Amsterdam and a trip to the beach! And another 'mini cruise' of course.....! 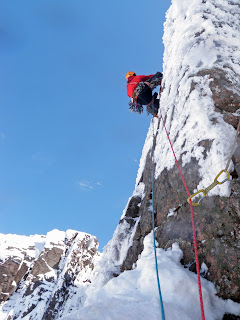 The only downside about being away for a period of time is the wandering of the mind, often to whats happening back home and what your mates are up to. Obviously I was distraught, near unconsoleable (not quite), that winter had returned while we were away, so it was with hope more than anything that I managed to sort out a partner for the first weekend back... some Guy called Robertson? As it turned out he seemed pretty keen and a trip into coire an lochain was arranged.

With the sun shining in the clear blue sky, conditions seemed polar - bare black rock, or absolutely caked! Numerous options were discounted with Swallow Tail Pillar (VII,7/8) the chosen route. First climbed in winter in 2008, it presumeably made an impression on the first ascentionists with the discription in SMC new routes log of the 2nd pitch being both hard and bold! Fortunately I wasn't aware of this when we started....! 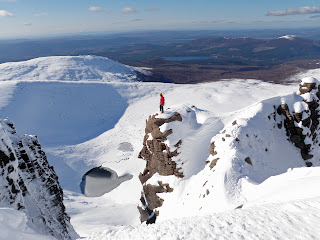 Guy cruised the first pitch once he'd excavated the route, leaving me the 2nd pitch which appeared short and slabby. Fortunately excitment levels were raised by the sparse variable gear and blind rounded cracks, making for great climbing and allowing the use of variety of modern techniques as well as good old school use of the knees! Simply a fantastic day to be out in the mountains, and maybe the best day of the winter? What a way to end the season.... or could another route forthcoming....? 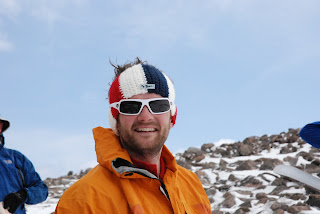 The following weekend (now into May!) again provided a good forecast, with saturday to be a ski day and sunday a climbing day. So saturday dawned to more snowfall and a drive west to the Sugarbowl car park for an adventure up Braeriach. Gully skiing was the aim for the day, but unfortunately conditions didn't quite play ball and the day turned into a tour and a walk (3hrs with skis on the back), with the gullies looking steeeeeper and firmer than expected! It was also great having a frenchman (from Westhill) with us called David, who seemed quite adept at skiing!

Team surveying the options on approach.... unfortunately none were to be skied! Next time. 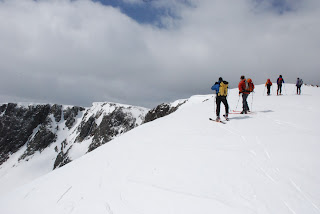 Sunday dawned clear again, with todays target again coire an lochain, this time with Steve who I had managed to presume out! The last time we had climbed together had been 5-6 years ago and had ended with Steve taking a 50-60 footer off White Magic! I can still remember the moment of Steve pealing off and seeing nuts (5) flying from the crack and the body rushing towards me ending with terrified screams and Steve level with me on the belay. On that occasion his only injury was to his arse, and not in the way you might expect.... On this occasion a slightly more moderate route was called for, with Headhunter chosen. The line is a very obvious groove below a striking tower (Pic n Mix, Gathering), which looks about grade III, but is actually VI. As it turned out, the psyche levels were not at their highest and I back off from the crux, convincing myself ice was required on the blank slab, with minimal gear in sight.... whether it does or not require ice, I'll have to seek a second option! 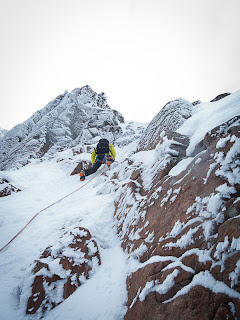 After my fail, we ran up a route called Ewen Buttress, which was great fun and surprisingly icy for May! (Steve below on the first pitch) A gentle stroll across the plateau and the realisation that we'd got the days the wrong way round....... perfect skiing conditions with a nice 2-3" of fresh powder! With 'winter' sports still very much on the go, I still wonder what surprises Scotland and weather will throw at us next....